Ogham is the name for the Celtic Tree Alphabet, which was used by the ancient Celts. Its origins are still a mystery, though theories abound, crediting everything from a language that came about in the confusion after the Tower of Babel; to it being named after the Irish god, Ogma;  to it being a secret sign language used by the ancient Druids. The truth is no one really knows, except to say that it was in existence well before St. Patrick came to the shores of Ireland.

While the only examples of ogham remaining today are written on stones, stick and trees were more than liely also used in the past, though time would have disintegrated any examples. O

Originally, the alphabet was made up of 20 letters, organized into groups or aicmi of 5 letters, with each group (sing. aicme) named after the first letter in that group. Thus the first aceme would be called aicme b because it begins with the letter b and so on. Later , when ogham began to be used in written manuscripts, a fifth aceme was added.

The writer would usually begin at the bottom, left-hand corner and then work up and to the right. Most stones still in existence today represent gravestones or some sort of directional or boundary markers.

Below is a series of charts showing the five aicmi, plus a fifth with more modern additions. The ancient Celts worshiped trees, believing that each one represented special powers, and so each letter of the Ogham alphabet is named for a tree. I have also included the word used for each letter, and the tree represented by it on the charts.

Enjoy! And see if you can spell your name using this ancient form of writing.

The illustration above is taken from "Myths and Legens: The Irish Race, by T. W. Rolleston. It is entitled "The Fianna raised a pillar stone with her names in Ogham letters." Public Domain 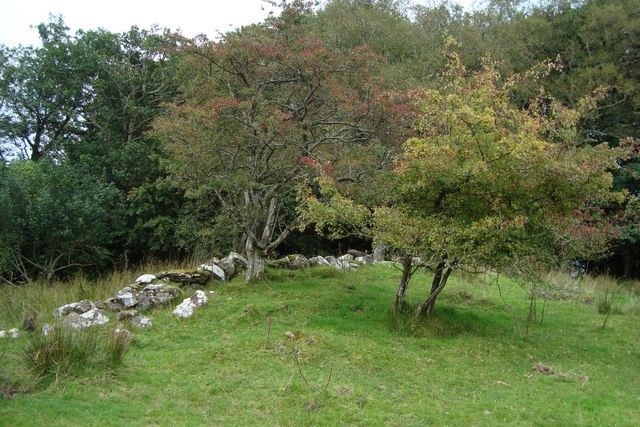 The Celts had a great respect

for nature and believed that

One of the nine trees sacred to the Celts

The first tree to sprout leaves in the Spring, the birch (beith) was known as the Tree of Birth and symbolized new birth and fertility. As such, it was burned on the fires of Beltane to welcome the coming of spring and a time of new beginnings.

It's unique white bark was also believed to hold protective powers against evil spirits and the fairy folk. To that end, it would be burned on Samhain, when there was a thinning of the veil between this world and the next.

The Celts believed the trees may hold the souls of their ancestors. Because of this, they saw the birth, with its interconnecting root system, as representing family connections.

Of course, this meant that it was forbidden to cut one down, though oddly enough, it was a popular material for baby cradles because of its protective nature.

The most important of the nine trees sacred to the Celts

Able to grow on bare mountain tops, where the veil between this world and the next was the thinnist, the rowan (luis) was know for its protective qualities. It's lofty position also meant it couldn't be cut down, except  for religious reasons.

The tree was associated with the goddess Brigid, and hung over doorways, much the same as St. Brigid's cross is today, where it was said to protect the household from misfortune and the living from the dead.

Rowan branches could also be found on graves where it was said to protect the deceased from evil spirits. The wood was used to make cart wheels and walking sticks, too, protecting the traveler on their travels.

A fairy tree, the wood was also used to make baby cradles to protect the child from fairies intent of stealing it away to replace it with a changling, the Celtic mother's worse fear.

It was believed the first woman was made from the rowan.

Another of the nine trees sacred to the Celts

Due to the fact that it produces both male and female catkins or blossoms on the same branch, the Celts saw the alder (fern) as representing the balance between male and female, as well as nature itself.

Found along rivers or lakes, the Celts believed it was inhabited by a water fairy, but it was highly cimbustible as well. As a result, cutting it down was forbidden since doing so might  anger the fairy who might burn down your house in revenge.

But that wasn't the only reason to forbid cutting it down. When cut;the wood turns from white to blood red due to its orange-red sap. This caused the Celts to believe it was also inhabited by the souls of their ancestors.

It was also considered highly sacred because its location near water together with its combustible nature meant it combined two elements, those of fire and water.

It was believed the first man was made from the alder.

In the Celtic creation story, the universe was hatched from two eggs nested in the willow (sall) - one the sun, the other the earth. At Beltane, Celts painted eggs to commemorate the event. Christians adopted the tradition for Easter.

Its location along rivers and lakes held special spiritual significance for the Celt who saw it as a sign of new growth, healing, and optimism. They believed sitting beneath it would banish depression and drive away melancholy.

Though it represented sadness in some cultures, the Celts believed its ability to relocate and grow anew when uprooted was a symbol of adaptability and the power to overcome adversity.

Its groves were considered so magical that priests and artisans would sit among them to gain inspiration and eloquence, as well as to hone their divination skills.

The willow flower was used to banish feelings of jealousy.

Referred to as the Celtic Tree of life, the ash (nion) was held sacred because of it's lofty status. Its branched reache heights of over 130 feet, stretching up to the heavens, while its deep and sturdy roots ground it to the earth.

In fact, it usually grows alone because of the amount of room its roots require. These deep, strong roots, together with its flexible yet hard wood, are seen as a symbol of strength and are the preferred wood for making wands or staffs.

It is valued for its healing abilites as well as its strength and represents stability, both of mind and body.  It was often used to banish mental strife as well as to stimulate psychic dreams.

Often planted near sacred springs, it has a distinct water connection like the alder,  but it too is highly flammable. Its wood is burned at Beltane to protect crops and cattle.

Where ash, oak and thorn grow together, there fairies live.

Second tree in the Fairy triad of sacred trees

Seen as one of the most powerful trees in the forest, the Hawthorne (uath) was both feared and respected. Due to its contradictory nature of beautiful flowers and deadly thorns, it was bad luck to cut a branch, except at Beltane.

Its beautiful flowers spoke of  fertility and new life, symbolizing the end of the cold, dark winter and the coming of spring. Each  Beltane, girls would carry its twigs before them in the hopes of attracting a husband.

But its blossoms also had a darker side. Their disagreeable odor was said to smell like death, and the trees sharp thorns could inflict mortal wounds that could fester and become infected.

Another reason to fear and respect the tree was the fairies that were said to inhabit it, who could curse or kidnap anyone they saw as a threat to their homes.

Said to stand at the gates of the otherworld.

One of the five magical trees of Ireland, most sacred of all.

Considered to be the one of the largest and most powerful trees in the forest, the oak (daire) was revered for its height, which reached up to the heavens. It was associated with the gods and symbolized strength and endurance.

Its leaves were the last to fall in the autunm, if they fell at all, and the Celts saw this as a sign of tenacity and termination. Though it was struck by lightning more than any other tree in the forest, it continued to grow and thrive.

The Celts saw these lightning strikes as messages from the gods, while the trees longevity symbolized wisdom. Priests and bards would gather in oak groves for inspiration and divination purposes.

Eating the acorns was believed to  increase wisdom, especially from those collected at night, And mistletoe discovered on the oak after a lightning strike was particularly potent.

The oak tree was known as King of the Forest.

Considered the evergreen twin of the oak tree

Where oak signifies the light half of the year (summer) the holly tree (tinne) represented the dark half (winter). It was favored during the cold, dark months as a sign of luck, which explain why we associate holly with Christmas-time today.

Like the oak, holly is resistant to lightning strikes. For this reason, it was valued for its protective qualities. Chieftain would wear wreaths of holly on thei heads for luck and babies would be bathed in holly water to protect them from harm.

Holly trees were also planted outside homes to protect them from fire, while the leaves were brought inside to provide shelter for the fairies with the hope the wee folk would return the gesture with kindness.

Signifying the victory of winter over summer, holly also represented the cycle of death and rebirth. In the dark months of winter, it was seen as a sign of hope for the coming spring.

Have you opened a new location, redesigned your shop, or added a new product or service? Don't keep it to yourself, let folks know.